Most days, newlyarrived Afghans fill the lobby of a church basement in Fairfax County, Va., asuburb of Washington, D.C.

Families withyoung kids, young couples, older adults — they're all here for help with theirresettlement cases, and to stock up on donated toiletries and housewares thatare piled everywhere in the Fairfax office of Lutheran Social Services of theNational Capital Area.

Since August,the organization has helped as many people as it did all of last year.

"For us,that feels like a surge already," said CEO Kristyn Peck in an interview.

NorthernVirginia is home to one of the largest Afghan communities in the U.S. Thatmakes it a prime destination for new arrivals. And Peck expects her office toget even busier. 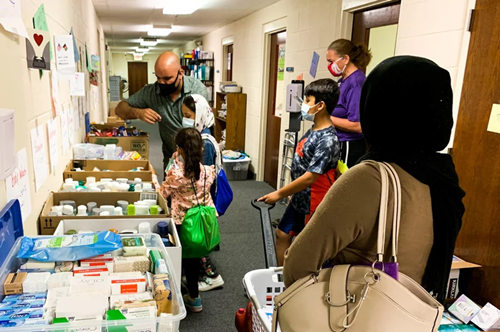 A newly arrived Afghan family stocks up on donated household items at a refugee resettlement office in Fairfax County, Virginia.

"Peopleare coming with really pressing immediate needs. Sometimes it's just as basicas clothing, showers, food," she said. "And then trying to make surethat they have a place to stay that night. And then move them into permanenthousing as quickly as possible."

Thehallways are lined with boxes of toothbrushes, deodorant, shampoo and diapers,as well as household items like plates, mugs and drinking glasses. Officecubicles serve as storage for pillows and bedding. So many donations havepoured in since August that the organization needed a storage trailer in theparking lot to handle the overflow.

"Today, Icome here because I need some stuff like the sheets," said a man who askedus to simply call him Khan. He worked in the Afghan government, and requestedthat we not use his full name because his wife and family are still in dangerin Kabul.

For now, Khan isliving with one of his sons, who's going to college in Virginia. And says hefeels welcome here.

"The peopleis very good, they are very honest. And they help us a lot," he said in aninterview.

Resettlementorganizations like this one are rebuilding on the fly after deep cuts duringthe Trump administration. Last year, the U.S. accepted the lowest number ofrefugees since the modern resettlement program began.

Now Congress hasauthorized more than $6 billion to support Afghan resettlement. The roughly 200field offices that do this work are scrambling to prepare. They're trying tofind more affordable housing, and hiring as fast as they can.

Roughly 53,000Afghans are living on military bases in the U.S., and 14,000 more will soon beon their way from military bases overseas. The vast majority are nottechnically refugees; they're entering the U.S. under what's known as"humanitarian parole." And they have lots of questions about how itworks.

"It's a newcountry," said David Mutombo, the head of Virginia operations for LutheranSocial Services of the National Capital Area. "So most of the time whenthey arrive, they don't have a clue about their next step."

That's the casefor one newlywed couple who stopped by the office this week. She's a U.S.citizen, he's Afghan. They escaped together from Kabul in August, along withthe man's brother. They asked that we not use their full names, because hisparents are still in Afghanistan, where they've been threatened by the Taliban.

The woman, whoasked to be identified only by her initials, N.T., says they spent a few weekson military bases in Italy and New Jersey, before coming back to her home inVirginia.

What's next forAfghans with humanitarian parole will look in some ways like what refugeestypically get. They're eligible for housing assistance, and help finding a job.But that all depends on resettlement agencies like this one doing more — anddoing it faster — than they ever have before.